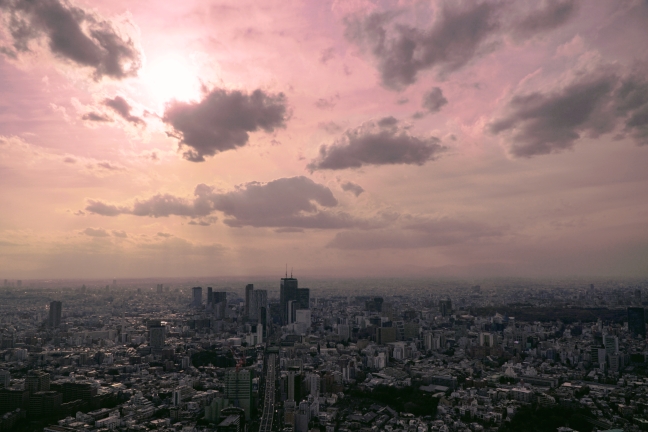 You would think a 40 million people metropole would be chaotic. I personally thought the chaos of my lovely small capital would shy out in the face of Tokyo (which is 30x Lisbon!). You would imagine, the simple act of crossing a road would be 10 times worse than in some Southeast Asian cities, but no.

Tokyo surprises you by a weird sense of “neighbourhood” small town, where silence is king and respect for the other prevails. I heard, so far, 1 car honking and 2 times an ambulance. Pedestrian crossing signs are followed religiously, and I was looked awkwardly when crossing a red light. Of course, the crazy “gaijins” decided to cross the red lights in central Shibuya crossing by bicycle… it was the most adrenaline I have felt in a long time, not because of the sense of danger, but because it is so wrong to do so here.

The fuss and busy life of central roads and train stations, follows an order that I had never seen in the chaotic human nature.

After standing in line to enter, you may feel a bit compressed. However no one in the metro pushes in when others are still exiting. You are always able to make your way out in a station. Also, I haven’t encounter so far any awkward traditional metro smells (maybe when the rainy summer begins…), neither seen myself in the scenario where I may succumb to the impulse of slapping the creature with a sneaky hand making it’s way to the crushed bodies. There is always a metro arriving, ALWAYS! The longest I have waited was exactly 3 minutes. Funny thing, every station has it’s own distinctive cute tune. I wonder if anyone is able to recognize them all.

I did a rookie mistake in the metro… shame on me… and the stares… as if I was a neanderthal coming out if its cave… What is it with getting a call in the metro anyway? It is seen as very rude, as the several signs and english anoucments remind you, to not speak on the phone in the Metro. As soon as I realized my mistake, I spoke as low as I could and as discretely as I was able to, but still… the “rude gaijin” label followed me for the rest of the day. Social pressure and norms have a funny way to make you feel bad when there is absolutely no rational reason to.

Even after 20 hours of personalized Japanese classes, I can barely survive the restaurant and telling the time. The 50 shades of formal expressions that mean exactly the same thing, rule out any possibility of remotely blending in on any succinct conversation you may have.

I have to take my hat off to the British, their government systems are impeccable, smooth, easy to use, easy to register, to consult, to change… Somehow I always thought they had imported it from Japan, but how wrong I was…

I was very thankful for the support of the lady that helped me register my residency, open the bank account and get a SIM card. I would have absolutely not survived it on my own. All the forms are in Japanese, and of course there is a different form for any little feature you may require for the same service. Online Banking? barely! Debit cards? Unknown in Japan. Cash withdrawal card (!!!) and a credit card that will take over a month to arrive is what you get.

I was extremely lucky since the rent contract was taken care by the company. If it was already 40 pages in UK, imagine here…

Tip: Do have cash with you at all times, not many places take credit cards. Alternative can be to charge a SUICA card that can be used in trains, subways, some shops and most vending machines smoothly.

Reflections on this new journey

The Japan opportunity came as an unexpected, but very welcome, surprise, in a time I was about to define my Amazonian destine in France. The amazing thing about leaving your options open, is the places this mindset may take you. I am lucky to work for a company that embraces this mindset and sees these type of moves as valuable to the company as they are to the person. Following a silent old dream, after 2 weeks in Tokyo I find it hard to believe I am in the second greatest city in the world, (of course, Lisbon is always number 1), embracing an international experience where I don’t speak or read the language, in a job I know nothing about, and within a culture that contrasts with everything I have experienced and am. What could possibly go wrong?